A Level Of Energy I’ve Never Experienced Before Via Breathwork & Meditation | Mark’s Testimonial.

Mark shares the level of energy he’s never experienced before over the 3 days and how the breathwork and meditation techniques helped open up intuitively and connect to himself more.

Mark: Yeah, my name’s Mark and I’m from Sydney, Northern Beaches, and I’m a chartered accountant in Sydney CBD so I’m in a business there. I listen to Guy Lawrence’s podcast like all the time and I’ve flicked one over to my wife and said “Oh, you need to listen to this podcast, “it’s pretty good,” anyway, the outline of the retreat was on the podcast as well. So she’s just got online and booked it for my birthday. There we are. And here we are. With the breathing techniques and the meditation techniques that we’ve used while we’re here, it’s just opened me up intuitively so much, incredible, I just wasn’t expecting it, I gotta say.

But on Saturday morning we did a breathing technique that really started to open me up a little bit, and started to see some colors and had a rush of energy through my body and out top of my head, which was kind of pretty weird, but you just go, oh that really happened. And then in the afternoon we did some more breathing techniques and sound music with that, in a session there.

Whole range of things. In one of those meditations a vision of my father came to me, which was crazy, you know, ’cause he died 10 years ago, and I guess one of the reasons why I’m here is to try and open up love and to be able to give love more, and he came to me and he showed me, from what we talked about the source, you know, what it, where it is and where it’s coming. He came into my heart, you know, this is the vision that I saw, he came into my heart as such a small thing, and then from there on it’s just started opening up even more, so in that vision he’s come to me and I came to the realization last night that, oh well he came to me for a reason and he came to me to show me how to love, you know, how to open up my heart and give love and that’s exactly what’s happened. But it got a lot of stuff out.

There were some sensations that went on in some of these that I just can’t explain, but I’ve have a crook, sort of a sore neck, you know, from being at a computer most of my life and in one of them I just had this burning hot sensation in the back of my neck, and then in another one I had this sort of, kind of, anxious sort of feeling high in my stomach, and I just wanted to breathe deep and just push it out with deep breath and stuff like that, that was actually just getting rid of it, you know, just happened.

I was feeling bound up before I got here, and I feel released now to a large extent, which is one of the reason why I came to try and get that release, because I’ve been doing yoga for about four years and joined a studio at our way recently and that’s kind of opened me up a little bit more spiritually but I kind of still thought I couldn’t really, I wasn’t giving love as much as I could of, and therefore being able to connect with people on that love level, sort of a little more freely, but this is, like this weekend has just changed that, which is great, I just feel that I can connect with people a whole lot more.

Particularly in the group because a lot of energy raised in the group, everyone gets on really well and the energy that’s created in the room over the three days, it’s just phenomenal, high level of energy. Unreal, you know. Wouldn’t have thought. 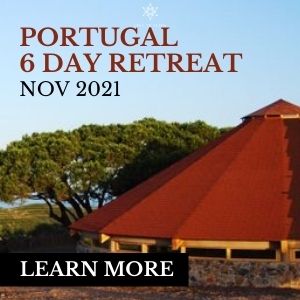