BioGeometry, Immunity and 5G – a guide to supporting yourself and your family in turbulent times

If you’re caught in the mainstream news cycles and ever-changing government rules, it can feel as though our society is out of control on every front: health, freedoms, a lack of connection with ourselves, with others, and with the earth.

A sense of support and protection is something that a growing number of people are looking for. BioGeometry, with its positive effects on the energy qualities within any living system, is an aspect worth investigating.

The BioGeometrical Way is a holistic world view based on science that encompasses the spiritual, developed by Egyptian Architect Dr Ibrahim Karim.

Dr Karim’s work has been applied in architecture, medicine, agriculture, horticulture, stress reduction, assisting children with learning disabilities, eliminating the ailments that resulted from electro-sensitivity, ecology, and reducing the effects of radiation. Dr Karim’s development of BioGeometry has been recognised by Government Ministers of Health, Culture, Tourism and Scientific Research, and by the Egyptian and Swiss governments, with funding for projects supplied by US Aid.

BioGeometry can be studied on a broad physical scale, such as learning how ancient humanity observed where the earth’s power sites were situated, and how this affected the way cities were built.

But for the purposes of helping you find immediate and effective support, right now we’ll focus on how BioGeometry can be used in your own environment.

A simple introduction to BioSignatures, in terms of BioGeometry

“BioGeometry is the design language of forms, colours and sound that reproduces the harmonizing energy quality in the surroundings as found in the sacred power spots.” – Ibrahim Karim.

BioGeometrical shapes interact with Earth’s energy to produce a balancing effect on all energy levels of biological systems. Research into shapes of body organs led to the discovery of the relationship of organ function, energy pattern, and shape. These patterns called “BioSignatures” produce, through resonance, a balance of energy and immunity that support orthodox and alternative medicine.

BioGeometry is the only science that has been effectively applied on a wide scale for the harmonisation of the effect of electromagnetic fields (EMFs) and geopathic stress (Earth energy grids) on biological systems.

Plants, animals, insects and other living systems each have patterns on their surface which are a core part of their energy system. The patterns contribute to the way energy flows and how it interacts with the environment. The study of these has contributed to the development of our understanding of BioSignatures.

BioSignatures are not symbols that have been created; rather the purpose of the studies has been to uncover and decipher what is already there – “reading” the energy of nature as a design language

BioGeometry uses geometrical shapes to express energy just as colour is described in physics using wavelengths and frequencies. Our sensory system acts as a window to the world around us, and our bodies resonate with the colours, sound, shapes, taste and angles that we experience.

BioSignatures are shapes that have an energy-balancing effect (similar to the tuning of an instrument) on an organ’s function. While properly balanced energy can produce instant healing, it is important to note that the study of BioSignatures should be seen as a field that supports other forms of orthodox medical treatments or alternative remedies, rather than a “cure”. 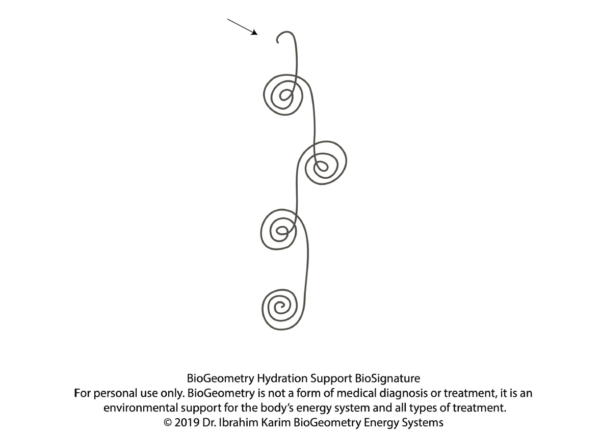 Example of the BioSignature developed by Dr Ibrahim for Hydration Support, which can be helpful in supporting against the effects of electro-magnetic radiation.

There are very specific ways that BioGeometry can be used, such as in the 2002 case where Dr Ibrahim Karim was asked to find a solution to the symptoms of electro-sensitivity experienced by residents of Hemberg in Switzerland.

Switzerland’s leading governmental telecom provider, Swisscom, had installed a mobile phone antenna to the town’s Catholic church tower. Residents began to suffer from sleeplessness, headache, and distraction. It was also noticed that the birds had moved away from the area.

Dr Karim effectively applied BioGeometry to the components of the antenna and was successful in eliminating the ailments of the electro-sensitivity, as well as other health conditions. Another benefit was that the overall ecology of the area improved. When Dr Karim was interviewed by the town’s mayor and residents almost two years later, they confirmed the positive effects were still felt.

It is easy to bring these benefits into your home so that you can help support you and your loved ones against the effects of electro-sensitivity and other health challenges such as viruses.

The BioGeometry Home Energy-Balancing Kit was developed and tested as an individual home solution, to be used to reduce the symptoms suffered from environmental stress.

And for your body, you can choose harmonising jewellery that goes with you everywhere.

If you are ready to dive in at a deeper level to the work of Dr Ibrahim Karim, order his books ‘BioGeometry Signatures’ and ‘Back to a Future for Mankind’.